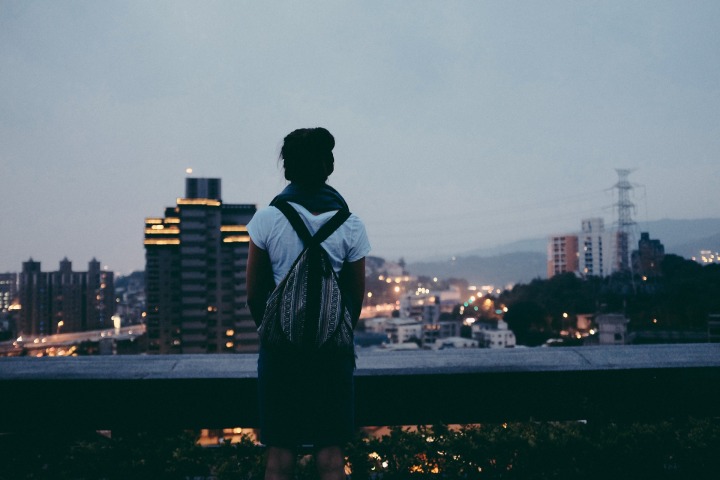 Walking together through the bus station and then out into the open air, it’s late on a Friday, and we’ve just left the cinema. Despite the time, the sky is still blue, and there are plenty of people about getting ready for a night of drinking in the bars and clubs that litter the seedy streets. Pulling her close as we stand at a set of traffic lights, she looks like a goddess, and the way her hair flows behind us as I push my lips onto hers reminds me of a song by Beach House, the name of which escapes me. Stood there embracing, the lights change but it doesn’t matter. They’ll change back again soon enough. The supermarket we buy our cigarettes from serves as a womb for the growing stories we share, and the lake we walk past on the way to mine mirrors the infant fascination we have with each other’s bodies. Back home, we eat pasta in the kitchen and then go upstairs and make love. Afterwards, we grab a shower then lie on the floor trying to sleep in a heatwave that shows no sign of ending. When we’re together, her body is mine, but her heart isn’t. I’m not sure who it belongs to, maybe no one. It hurts knowing I’m not the one. That despite how intimate we are, she has no desire to spend the rest of her life with me. She enjoys it when we fuck, but to her, it’s nothing spiritual. It’s just something that passes the time. Getting up after she drifts off, I go downstairs and down several beers while attempting to write. It’s okay, but the words are vaguely absent. I want them to shine just like how I want our love to shine, but it’s all so futile. The morning after and we’re eating breakfast out in the garden. It’s the beginning of the weekend, and we haven’t made plans. Moving behind her as she stands there with her face to the sun, I lift up her top and cup her breasts. Letting out a surprised shriek, she complains that people might be watching but makes no attempt to stop me. Squeezing her nipples, she strokes my beard and kisses me. It should be the perfect start to the day, but it doesn’t change a thing. She’s mine to possess but not to love, and this means war. Sliding down her shorts, I degrade her in open sight, and so the game begins.

Seed Is the Key