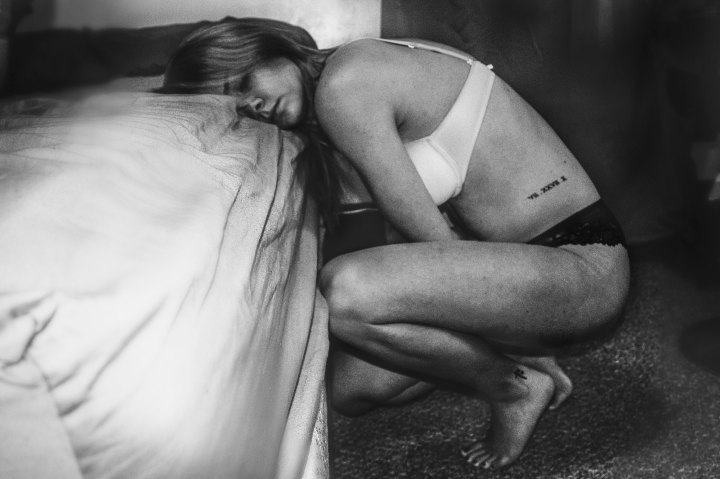 Woke up drunk and needing the toilet, so I pissed in an empty wine bottle as I didn’t have the energy to make it to the bathroom. Holding the golden fluid before me like it was some archaeological find reminiscent of that scene in Indiana Jones, I popped the bottle on the windowsill where it sparkled in the morning sun as I crawled back into bed nursing my delicate head. Some film was playing on a loop. The Howling. Y’know, that wolf flick from the 80’s. Now and again snippets of dialogue brought me out of my funk, but then I’d slip away again, so peaceful. So serene. Well into the afternoon, junk food came and brought me back to the land of the living. A burger oozing with fat like the fucker was still alive or something. Chomping on the thing while taking a bath, the juices dribbled down my chin and then into my chest hairs. The cheese and tomato sauce got in my beard as well, but all I had to do was slide into the soapy water and just like that I was clean and good to go. Soon after, a cigarette kicked my body into gear and a beer shit placed me among the company of the gods. Only there was no tissue paper. Always forget to buy the stuff, so I ended up using the shower head as a makeshift bidet. Is this a hipster existence? Or that of a bum? Am I a kooky writer or just some weirdo who went through life taking too many left turns? Yeah, that one. Stumbling outside, I threw some trash into the wheelie bin and stood there taking in the afternoon sun. The fitty neighbour opposite pulled up in her car and headed inside without acknowledging me. But I acknowledged her, and the sight of her sideboob gave me much food for thought. Picking out a bit of burger from between my teeth, I flicked it into the air and it stuck on the window of next door’s car. Across the road, the fitty neighbour reappeared from her front door with a pile of newspapers in her arms. Chucking them into her recycling bin, she looked up and caught me watching her. There was a hint of recognition. Perhaps the thinnest trace of a smile. I couldn’t be sure. Turning her head, her golden hair glowed beneath the sun. It reminded me of gingerbread men, and the spicy taste of the ones I used to eat as a child purchased from the cake shop up the road from my nan’s old house. Closing my eyes, I could taste the flavours on the tip of my tongue. So vivid. So real.

The Skin of a Chicken