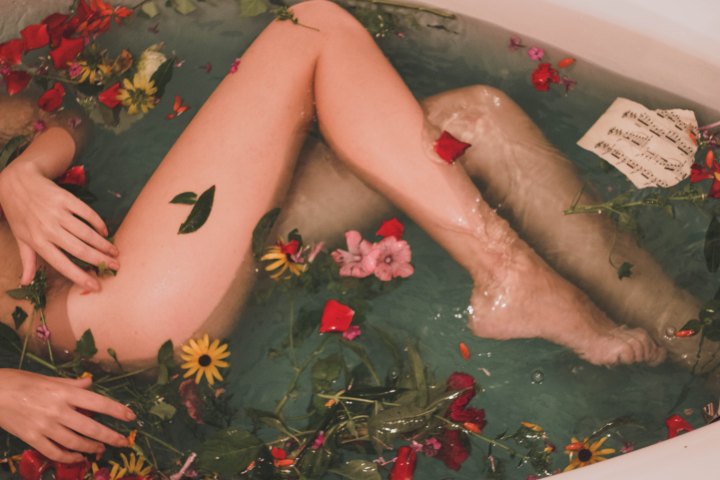 The steam rises from the bathtub. It licks the air like the searching tongue of a snake as he rests his chin atop her bony, delicate skull. She’s singing. The words he can’t quite make out for sure, but to her, there’s meaning in every syllable. It’s not important if the language is real or not, that it comes from a place of tenderness is all that matters, and so she keeps spilling her words as he spins the tap to top up the tub with hot water. It burns and turns their skin red but it eases the pain of being human, and so he runs it until the water’s on the brink of overflowing. Through the window, the steam escapes and joins the snow that swirls around like the echo of a long-lost voice trying to find its owner. Taking the metal comb from the sink, he glides it through her hair, hard enough so that the metal teeth dig into her skin causing her nipples to harden. Digging harder, X stumbles over her imaginary words before rolling onto her belly. Those big, pretty eyes, they lock onto his, and neither of them blinks. What goes between them is as ethereal as the snow. The gaze. The look. With his cock pressed between her breasts, the heightened sense of intimacy isn’t through the pleasures of the flesh but the touching of two souls. Two souls hiding away from a cruel and crumbling world that given half a chance would snuff them clean out. Pulling herself up, she rests her head on his chest. Scooping handfuls of water, he pours them over her shoulders to keep her from going cold, and in return, she kisses the curls of his hair, and as the steam flows through the window, they hold each other until they transform from two bags of bones into two glowing orbs, as luminous and stark as two distant stars in the void of outer space.