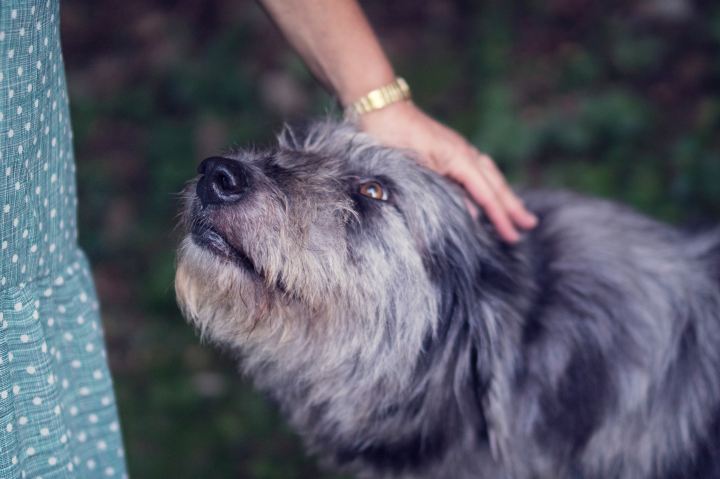 Gripping the lead tightly in my right hand, I pull Hachikō close behind me. With my left, I reach out to touch her back as she dry heaves in the gutter. It seems the smell and sight of his shit was too much for her to bear. I’m hoping she’s okay, not least in part because I don’t want her to puke up the chicken and chips I bought the two of us only a few hours earlier. If she does, it’ll mean I’ll have to buy her yet another meal, and I really don’t want to, because I’m poor enough as it is. Rubbing my hand in circles on the small of her back, she moans and groans but can’t put any energy into snapping at me. For this, I’m thankful. Bent over as vehicles chug past throwing distorted light at our prone figures, she shimmers at my touch enough for tiny sparks of electricity to flash at the tips of my fingers. Turning her to face mine, I see spittle at the corners of her mouth, and upon her forehead, a dozen beads of sweat threatening to trickle into her eyes. Looking down at Hachikō, I shake my head at him while grimacing. It’s not his fault, I know, and yet what came out of his arse was undoubtedly the work of the devil. Giving me a sheepish glance, he lowers his head and sniffs the ground. For a second, he catches the scent of something good and wags his tail, only to remember he’s been a bad boy to which he glances at me again nervously.

Breathing in big lungfuls of air, she turns and clings onto my shirt with both hands. Squeezing her eyes shut as tight as she can, the lines on her face seem etched into her skin. It makes her look ten years older, but I keep such information to myself.

“What do you think I’m doing?” she manages to stammer, “I’m not standing here admiring the fucking view.”

For some reason, I look across the road at the view she’s most certainly not admiring. There’s a boarded-up store that if memory recalls was once a hairdresser’s. The place has been shut for years. Looks as if squatters have turned it into a home, or at least what could be classed as a home for those such as them. It’s more akin to a way station; a place they can anchor themselves to before it’s time to continue their never-ending journey to a destination that will never arrive. I can smell the stench of stale piss coming through the broken boards covering the windowless windows. Mixed with the pungent aroma of dogshit and general stink of human activity, it’s as if this place were less like heaven and more like purgatory. Not that I’d ever in my life considered this place to resemble heaven, but there have been times when I’ve found traces of beauty that seemed beyond all rational explanation. Little slithers of something without a name that felt like a whispered gift from angelic lips. Not today, though.

“If you think you’re gonna puke, swallow it. If anything comes out, the dog will most likely eat the lot.”

With this, she promptly pukes.